Asian economies are setting a considerable pace in their leading growth in terms of international patent filings. Internationally there is still a healthy growth in the patent system, with an exceptionally strong presence from some of the Asian countries. A 4.5% growth in applications filed using the Patent Cooperation Treaty (PCT) route in 2007 compared with 2006 was reported by the World Intellectual Property Organization (WIPO).

A considerable amount of the said filings came from Japan, Korea and China, which constitute 25.8 percent (40,248 applications) of the total filings. But many ASEAN countries such as Singapore are also experiencing rapid growth as demand becomes greater. because of a better linguistic diversity, faster rates of filing in Asia of patent searches for pre-existing work is taking place as more of that is increasingly in the local languages.

The Director General of WIPO, Dr. Kamil Idris, said that “The growth in patent filings by a number of countries in north east Asia and their share of overall patenting activity is impressive and confirms shifting patterns of innovation around the world”. He also added “The PCT remains an attractive option for businesses as it makes it easier for companies and inventors to obtain patent rights in multiple countries”.

The graphs below show the extent of growth within some Asian countries excluding China, Japan and Korea. 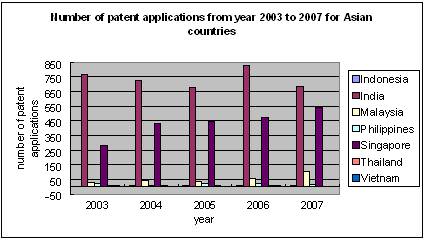 More patents are being filed domestically and increasingly being taken to international levels in these countries. India and Singapore seem to be experiencing the most rapid growth.

The graph below demonstrates the growth within Asian countries excluding Singapore and India. 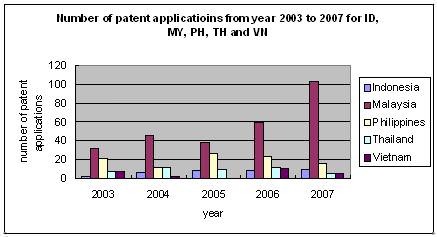 The graph below shows the top ten countries with most number of patent applications from year 2003 to year 2007. Apparently, the first three countries, namely, United States, Japan and Germany are the only consistent in their ranks from year 2003 to year 2007. It can be seen how Korea moved up to fourth place in 2007 from being the seventh in 2003. Likewise, China gained the seventh position in 2007 from being the tenth in 2003.

Although companies from both USA and Europe dominantly filled up the spots as the top filers in 2007, Asian countries had also participated actively and made remarkable growth rates. Aside from Japan, Korea and China, countries, which have also tallied considerable number of applications, are India (686), Malaysia (103) and Singapore (542). What with this very significant historic shift, after hundreds of years of European languages domination in patent applications, interested companies and inventors are now increasingly having to be able to also view patented ideas in those local languages.

The ease of using the PCT route together with its continuous improvements in the filing process invited a lot of inventors and industries in the recent years. WIPO said that the number of PCT applications doubled in the last four years compared with the figures in the earlier 18 years of its operation. WIPO is also expecting to double the figure once again in the next four years.