On June 21, 2008, the Philippines’ National Committee on Intellectual Property Rights (NCIPR) was set up to strengthen the efforts of the Philippine government in curbing piracy and counterfeiting. The Committee is composed of the Department of Trade and Industry (DTI) as chair and the Intellectual Property Office (IPOPHL) as vice-chair and other member agencies such as the Department of Justice (DOJ), Department of the Interior and Local Government (DILG), Bureau of Customs, National Telecommunications Commission (NTC), National Bureau of Investigation (NBI), Philippine National Police (PNP), Optical Media Board (OMB), National Book Development Board (NBDB) and Food and Drug Administration (FDA).

This resulted in the birth of IPOPHL’s “Oplan Holistic.” According to Ricardo Blancaflor, Director General of the IPOPHL, with Oplan Holistic, “we [now] have the chance to become more aggressive” when asked on how this campaign differs from past strategies. To date, IPOPHL has signed a deal with the Philippine Ports Authority (PPA) to implement strict border control measures in order to prevent the use of the Philippine seaports as entry and exit points of operated and counterfeit goods. IPOPHL has also conducted workshops on intellectual property and identification of counterfeit and pirated goods for the benefit of the officials of the PPA. Agreements were also signed with the Securities and Exchange Commission (SEC) and the Bureau of Customs to deputize the IPOPHL in enforcing intellectual property laws.

IPOPHL has signed a deal with the Philippine Ports Authority to implement strict border control measures in order to prevent the use of the Philippine seaports as entry and exit points of operated and counterfeit goods.

The IPOPHL did not stop there. As part of its “Oplan Holistic,” IPOPHL sought enforcement mandate from Malacañang – the residence and main workplace of the Philippine President – through the DTI, such as the granting of visitorial rights in order to be allowed to inspect warehouses where commodities to be seized are suspected to be stored, to secure copies of documents pertaining to the nature and particulars of the commodity or goods subject to importation and to prosecute IPR violations, piracy, counterfeiting and other similar unlawful acts all with the strategy of checking on mall owners’ compliance and border control. According to Blancaflor, with such rights, the IPOPHL will ensure that those who violate will be meted out with cancellation of business name and registration and mayor’s permits, and charged in courts.

In its push for a more holistic approach in the country’s battle against piracy, the IPOPHL is including the cancellation of US visas of mall owners as one of its enforcement powers. It also opened piracy hotlines in order to bolster its call for support from the public to report places where pirated and counterfeit goods are sold. 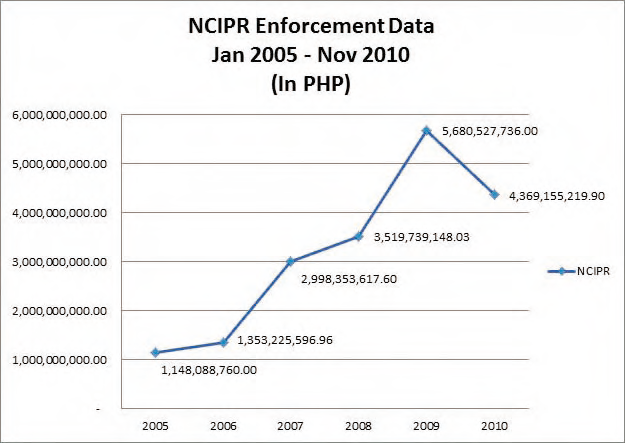 In February this year, the IPOPHL, together with the BOC has confiscated counterfeit or imitation versions of known footwear brands which were consigned to Orient Seas Trading and Anchorage Indenture Import Export. Both shipments were found to contain counterfeit Havaianas, Nike, Lacoste, Crocs and other leading footwear brands. The estimated value of the fake branded shoes consigned to Anchorage Indenture was P60 million (US$1.39 billion) while that of Orient Seas was estimated to be worth at least P80 million (US$1. 85 billion).

In April this year alone, the IPOPHL, together with the Bureau of Customs, has confiscated and destroyed thousands of smuggled counterfeit products from importers identified as Multi Karat Enterprises and Portwings Trading, amounting to at least P300 million (US$6.95 billion). The condemned articles were identified by Customs Commissioner Alvarez as imitations of Energizer batteries and an array of well-known brands such as Louis Vuitton, Chanel, Gucci, Lacoste, Breitling and Nike.

In May of this year, the USTR removed the Philippines from the Out-of-Cycle Review (OCR) for the first time. “This is a major step for the new officials considering that we took a major step in addressing counterfeit,” says Blancaflor.

The Philippines was removed from the priority watch list in 2006 and was since placed in the ordinary watch list with an out-of-cycle review conducted by the USTR in 2008-2010. “We are only one step away from being removed completely,” says Blancaflor.

The fact that the Philippines was removed from the OCR is a good indication that intellectual property rights enforcement in the country is gaining momentum. “We are halfway there,” says Blancaflor. With the amendment of the Intellectual Property Code of the Philippines passing the third reading in Congress, more can be expected of Oplan Holistic. The salient areas of amendments include 1) setting up of the Bureau of Copyrights within IPOPHL, which have not only regulatory powers but enforcement powers as well; 2) accession to WIPO Internet Treaties; and 3) legislated enforcement powers of the IPOPHL.