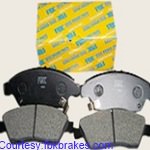 purpose of this Act is to prohibit false trade descriptions and false or misleading statements, conduct and practices in goods and services, thereby protecting the interests of the consumers.

In a recent case (DJ Auto Components Manufacturing v FBK Systems), the High Court adjudicated on the issue of misrepresentation and infringement of a registered trade mark under the TDA. The applicant invoked these provisions to strengthen its claims rather than rely solely on the infringement provisions appearing in the Trade Marks Act. Under the TDA, the burden is on the respondent to convince the court that its mark should not be declared as a false trade description.

The contending marks are shown below:

In its defence, the respondent argued that FBK was part of its company name, namely, FBK Systems and it therefore qualified for own – name protection. In addition, the respondent took the position that the packaging of goods under both brands was different, negating any possibility of confusion in the market. The words Made by FBK Systems appears on respondent’s packaging.The case required the court to decide whether the applicant’s registered FBK mark used on auto parts are infringed by the use of the FBK Brake Shoe & device mark by the respondent on similar goods.

Upon review of the factual matrix and the evidence submitted, the Court held that by affixing the letters FBK on its goods and packaging, the respondent had attempted to free ride on the goodwill of the applicant. The Court observed that the addition of a device was insufficient to avoid confusion due to the prominence of the letters FBK. It said that had the respondent intended to act in good faith and not infringe the applicant’s marks, it would have used the device mark on its own rather than using it in combination of the letters FBK, where these letters were positioned to attract the viewer’s attention while the device or other words like Made by FBK Systems were printed in smaller font rendering them almost insignificant.

This case is important as it can now be used as a precedent and encourage trade mark proprietors to invoke the Trade Description Act together with the other provisions on infringement in the Trade Marks Act. It would also be helpful for the proprietors fighting infringers that try to circumvent the law by adding an insignificant device to a mark thereby claiming it to be distinctive enough to co-exist.